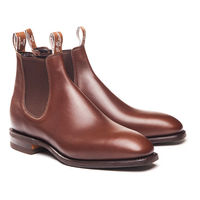 A craft of boot manufacturing that goes on to this day

Whenever we see or hear the name R.M.Williams, our thoughts immediately turn to the boots and clothing for which Reginald Murray Williams, and the company he forged, became Australian icons. But there always has been much more to RM than bush clobber. This remarkable Australian was also an explorer, pastoralist, horseman, stockman, stonemason, leather craftsman, goldminer, well-sinker, author, businessman and historian – excelling at all, and more.

It is his adaptability – combined with unbridled determination, self-belief and faith in others – that makes RM stand out from the pack. Most people would have given up – or died – attempting some of RM’s pursuits, especially during his time roaming the Western Desert with Bill Wade, an evangelist seeking to convert Aboriginals to Christianity; most would not have the perseverance to succeed, let alone excel, at the seemingly impossible expeditions and projects he tackled; few who have tasted fame and fortune are able to discard the trappings for a simple life as did RM at the peak of his success; and many people who are practically skilled are not intellectually talented. Except the man who has become known worldwide as ‘RM’. He could, it seems, make just about anything, a talent he inherited from his father and which is today aptly demonstrated by his own sons. “From the earliest days when I had stood beside the bellows in my father’s smithy, I had always been interested in making things with my hands,” RM said in his autobiography Beneath Whose Hand.

Exquisite handiwork, especially with stone and leather, is one thing. But for someone who received little formal education (he left school at 14 – by his own admission, bottom of the class) he was well-read, articulate and, as he demonstrated in several books, a gifted and compelling writer. He said the little schooling he had at least taught him “that the information to solve any problem can be found somewhere”.

But for all his achievements and notoriety, RM was never a ‘high-flyer’, a person who sought recognition and adulation, or one comfortable mixing in the ‘right’ circles. Indeed, he abhorred status and privilege, at least for himself. In middle-age, with the world at his feet and living in luxury in Adelaide, he left everything – including his first marriage – to return to a simple life in the bush. “I suppose no amount of luxury can turn the man from the camp fire into a social butterfly,” he noted in his autobiography. His closing sentence in the book says everything about RM’s attitudes to status and wealth: “What a waste of time, climbing to the pinnacle of success only to slide willingly down the long slope to a humble but happy camp fire where I belong.”

When asked who were his heroes, almost all the names listed were bushmen like himself: Archie McLean, Tom Quilty, Mick O’Donoghue, Will Ogilvie, Charlie Ferguson, ‘Dollar Mick’, Alan Bennett and Sidney Kidman. And one from another place and time – Rudyard Kipling.

Archie McLean, then manager of Kidman’s Anna Creek Station, inspired RM to approach Kidman with a proposition to make pack-saddles for the network of stations Kidman had developed from North Queensland to South Australia. Determined to make a go of things during the Depression, RM precisely quoted to Kidman what McLean had told him years earlier: “Some day a better pack-saddle will be made using a higher fork in the steel, a deeper side, and rigged with double girths, instead of carrying breast plates and breeching. And the bags will have gussets for items that have to be carried upright.” It is now history that Kidman, whose pack-saddles were then made by Harris Scarfe, said: “I will give you an opportunity” – and in so doing launched a career and business that has become a household name.

Soon after he began making boots and leather goods at 5 Percy Street in Prospect, Adelaide, Charlie Ferguson, a near cripple, asked RM to teach him the craft. RM didn’t have the heart to tell Charlie he had no money for leather, let alone wages. “It was then I made the most rewarding experiment of my life,” RM said in Beneath Whose Hand. He placed a two-line advertisement in The Adelaide Chronicle: ‘Elastic side boots made to order. Twenty shillings. Cash with order. 5 Percy Street Prospect’. The orders came in, a business was born, and Charlie Ferguson remained the backbone of the company’s boot-making until, as RM wrote, “his afflictions brought about a collapse of his frail body”. RM’s workers voted to continue to pay Charlie until his death. “When the end came and his grieving family buried him, his wife wrote what I considered the most valuable letter I ever received,” RM modestly recorded. “Charlie was a great man.”

A man known as Dollar Mick had taught RM to make boots using one piece of leather, a technique that more than 70 years later distinguishes R.M.Williams boots from all others. “A wanderer, horse-thief and horseman of admirable style,” according to RM, Dollar Mick stopped at RM’s camp in the Gammon Ranges during the Depression. “My success began the day Dollar came in his mule buggy and asked to stay,” RM noted in his autobiography. After showing RM how to make pack-saddles, the pair’s attention turned to boots, partly because Dollar was practically barefoot, but also because, as RM stated, “It was very important for a stockman to have suitable boots. They were the mark of professional status. So we decided we would make Dollar a pair of riding boots”. The rest is history.

Asked what made him successful, RM’s answer was – like the man himself – pointedly straight. “Sheer necessity, the greatest teacher in the world. We didn’t talk about living, but about existing,” he said of the period during the Depression when he and his young wife Thelma camped at Italowie Gap in the Gammon Ranges as RM sought to eke out a living as a well-sinker. It is a philosophy that carried him through his life, and although there were periods when he wasn’t short of money, he never forgot its value, the difficulty in earning a living, and what it takes to be successful.

While he was camped in the Gammon Ranges, and later in the Adelaide Hills with his wife and first two children, he picked up whatever odd jobs he could find, often for a penny or two at a time. At one point during the Depression, he travelled alone for months through several states seeking work.

When he finally established his business at 5 Percy Street it was a long and difficult process, largely because he had no development capital. But the orders gradually came in, the business expanded and before long the Longhorn brand was known and respected far and wide.

Like any successful business, R.M.Williams has had its ups and downs, but the sheer quality, application and uniqueness of the products has always shone through. RM himself walked away from day-to-day management in 1952 when other ventures called – goldmining in the Northern Territory, a tea plantation in New Guinea, and later a bush block near Eidsvold in central Queensland. He succeeded on each occasion, but not without immense hardship and, at times, considerable physical risk.

These were tribulations that RM was able to overcome, but he never really accepted his two failed marriages, for which he blamed himself. “I have always been up and going, always anxious to enter new enterprises, new adventures, seldom allotting enough time to the noble art of staying married,” he said in his autobiography. He was, however, immensely proud of his six sons (one who died as an infant) and three daughters, and that the children of his two wives – Thelma and Erica – have remained close.

Clearly RM learned from his failures, even though two were beyond his control. He was reluctantly forced to wind up one of his mining ventures when robbed by an employee of the wolfram he had painfully extracted from a mine near Tennant Creek; and he shunned South Australia forever as his home when then Premier, Sir Thomas Playford, resumed land at Northfield that RM was diligently developing.

Achievements, of course, overshadowed the hardship in RM’s life. Apart from his obvious public success in creating a global business that bears his name, several others stand out: his key roles in establishing the Bicentennial National Trail, the Australian Rough Riders Association and its newsletter that became the magazine Hoofs and Horns, and the Australian Stockman’s Hall of Fame. Without RM’s support and commitment of time, none would have got off the ground. In the early construction phase of the Hall of Fame at Longreach, RM (then well into his seventies) camped at the site, building a stone cottage that has become the library, and working on the distinctive main building itself.

His stonework at the Hall of Fame and on his property “Rockybar” near Eidsvold, Queensland, are superb examples of RM’s ability as a stonemason. This work is matched only by his proficiency as a leather craftsman. His plaiting was second to none. One item at which he excelled was a watch pouch made from one strand of kangaroo hide. Like many of the skills RM gained, this one was honed in the outback in makeshift camps, with wily bushmen as his teachers.

RM’s heart was always in the bush. He did things no one else would attempt, ploughed on when others would give up, and explored country that few Australians have seen, even today. The Australian bush has bred and forged some amazing people, but when the tales of great bushmen are told in the decades and centuries ahead, the name of Reginald Murray Williams will be at the top of the list.